The Western Cape contributed just more than half of the total crop. The Northern Cape’s irrigation areas, although still the second largest producer of wheat, with 285 000 tons, produced 35 000 tons less than the previous season.

The area utilised for wheat production continued its declining trend, decreasing by almost 43% from the 2004/2005 season and by 6% compared to the 2013/2014 season. Decreased plantings by dryland wheat producers in the summer rainfall area (Free State) are the largest contributing factor to this observed decline. Dryland wheat is planted on approximately 73% of the total 476 570 ha, although its contribution is only 53% to the total crop figure.

The average national yield was 3,67 t/ha and varied with only 0,04 t/ha over the last three seasons. The yield in the main production areas ranged from 2,85 t/ha in the winter rainfall area (Western Cape) to 7,50 t/ha for irrigation wheat produced in the Northern Cape.

The 337 representative crop samples were graded as follows: 31% was graded B1, 18% B2, 13% B3, 5% B4, 26% utility grade (UT) and 7% class other wheat (COW). The majority of the samples (69%) downgraded to utility grade was as a result of the percentage of either other grain and unthreshed ears or insect damaged kernels or a combination of both exceeding the maximum allowable level for grades B1 to B4.

The percentage total damaged kernels and/or combined deviations (19%) were also contributing factors. Of the samples downgraded to class other wheat, 68% was due to the presence of live insects and 24% as a result of the percentage field fungi infected kernels exceeding the maximum allowable level of 2%.

The abovementioned percentages are weighted averages based on the top five cultivars per region as calculated from the cultivar identification done on each of the 337 crop samples. 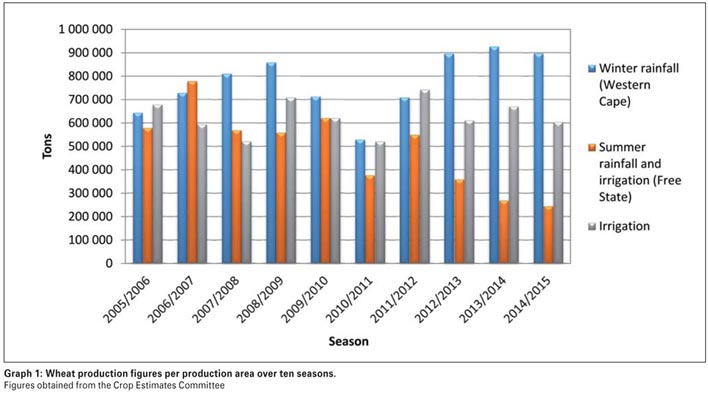 All national, seasonal and regional averages provided in this article are weighted averages.

Although the winter rainfall areas again reported the lowest average whole wheat protein, namely 11,1%, this value is slightly higher than the previous two seasons. The production regions in the Free State reported the highest average protein content (12,4%) followed by the 12,1% of the irrigation areas.

The Dumas combustion analysis technique is used for the determination of crude protein. Combustion of the sample at a high temperature (1 100°C) in pure oxygen sets nitrogen free, which is measured by thermal conductivity detection. The total nitrogen content of the sample is determined and converted to equivalent protein by multiplication with a factor of 5,7 to obtain the protein content. This factor is based on the amino acid composition of the proteins in wheat as well as the varying levels of non-protein nitrogen present in wheat.

Compared to the previous season, the average hectolitre mass increased by 0,7 kg/hl to 80,2 kg/hl and was just below the six year weighted average of 80,3 kg/hl. Of the 26 samples that reported values below the minimum level for grade B1 wheat, ten originated in the Western Cape (winter rainfall area), 15 in the Free State and only one in Mpumalanga. The regional averages ranged from 79,2 kg/hl in the Free State regions to 81,2 kg/hl in the irrigation areas.

To measure the enzyme activity (mainly the α-amylase activity), the falling number method is used as an indicator of kernel germination or sprouting. Both high (>400 sec) and low (<250 sec) falling numbers will have a negative effect on the baking quality.

Irrigation areas tend to have the longest peak time and the Western Cape the shortest. The peak time is a measure of optimum dough development and thus a measure of protein quality. Peak times of 2,8 to 3,5 minutes are generally considered acceptable.

The extraction rate is an indication of the flour yield that can be obtained from a given amount of wheat. Composite samples per class and grade per production region were cleaned, conditioned and then milled. The average Bühler MLU 202 laboratory mill extraction for the 70 composite samples was 73,4% – similar to previous seasons.

Colour is one of the important properties of milled grains and the colour of wheat flour affects the colour of the finished product. Generally speaking, a bright white colour flour is more desirable for most products. The Kent Jones colour (wet colour) method determines the influence of bran and/or extraneous material present in flour. The lower the Kent Jones colour, the lighter/brighter the flour and vice versa. The average Kent Jones colour this season was -3,3 KJ units, slightly lower than the previous two seasons.

The ability of wheat flour to produce dough with good gas retaining properties is therefore attributed to gluten. The wet gluten (14% mb) this season averaged 28,9% and the dry gluten also on a 14% moisture basis, 9,8%. These values are slightly lower than the previous season, but are still indicative of a good quality gluten for pan bread baking if the flour protein content of 10,7% is considered.

As it is formed from flour and water, developed and broken down, a dough’s resistance to mixing is measured and recorded by the Farinograph. This resistance is called consistency. The water absorption is the amount of water required for a dough to reach a definite consistency (500 Brabender units) and is expressed as a percentage of the flour mass, reported on a 14% moisture basis.

This season’s average water absorption was 59,5% compared to the 60,1% of the previous season. The Free State area had the highest water absorption of the three production areas, albeit only slightly.

The development time is the time from the beginning of water addition until the dough reaches its optimum consistency. A long development time can be associated with flours with a high percentage of gluten-forming proteins.

The stability is the time during which the top of the curve intercepts a horizontal line through the centre of the curve. This gives an indication of the dough’s tolerance to mixing: The longer the stability, the longer the mixing time that the dough can withstand. A dough with a longer stability can also withstand a longer fermentation period. The stability value of 8,3 minutes compared well with the 8 minutes reported previously.

The mixing tolerance index value provides an indication of the extent to which breakdown of the dough occurs after reaching its optimum consistency. The higher the value, the more and the quicker the breakdown of the dough occurs. There was no significant difference between the mixing tolerance indexes of the 2014/2015 (35 BU) and the 2013/2014 (38 BU) seasons.

The Alveograph measures the resistance of the dough to stretching and also how extensible the dough is. A sheet of dough of a given thickness is prepared under specified conditions and expanded by air pressure into a bubble until it ruptures. The pressure inside the bubble is measured. The area under the curve gives an indication of the dough strength. The average strength was 38,1 cm² (37,6 cm² the previous season). The irrigation areas had the highest average strength of 42,1 cm² and the Western Cape the lowest with 33,1 cm².

By dividing the P-value by the L-value, the P/L ratio is obtained, thus providing an approximate indication of the shape of the curve that combines stability and extensibility (viscoelastic properties). The average value this season was 0,59.

The Extensograph measures the resistance and extensibility of a fully mixed, relaxed flour-water dough, by measuring the force required to stretch the dough with a hook until it breaks. For bread baking purposes, a strong dough with good extensibility, good resistance, a large area and a well-balanced height to length ratio is needed.

The 100 g loaves baked using the straight-dough optimised bread making method, received an average evaluation rated as “excellent”. The basis for this evaluation refers to the relationship between the protein content and the bread volume.

Mycotoxins, secondary metabolites produces by field and/or storage fungi on agricultural commodities, is foremost a food safety issue, but the occurrence of these fungi can also lead to a reduction in the quality of the commodity. Most mycotoxins are chemically stable and tend to survive storage and processing even when cooked at quite high temperatures as is reached during bread baking. Environmental factors, such as temperature, humidity, soil and storage conditions influence toxin production.

40 randomly selected samples, representing different regions as well as classes and grades, were tested by means of a SANAS ISO/ IEC 17025 accredited multi-mycotoxin screening method using UPLC-MS/MS. The samples were tested for Aflatoxin G1; B1; G2; B2, Fumonisin B1; B2; B3, Deoxynivalenol, 15-ADON, HT2 - Toxin, T-2 Toxin, Zearalenone and Ochtratoxin A.

The import quality results are published at the end of each production and marketing season and are available on the SAGL website (www.sagl.co.za).

With gratitude to the Winter Cereal Trust for financial support of this annual survey and to Agbiz Grain members and milling companies for providing the crop samples.