The 2011/2012 summer rainfall season was characterised by belowaverage rainfall over much of the central parts of the country while large parts in the west and south and some areas in the east, received above-average rainfall (Figure 1). 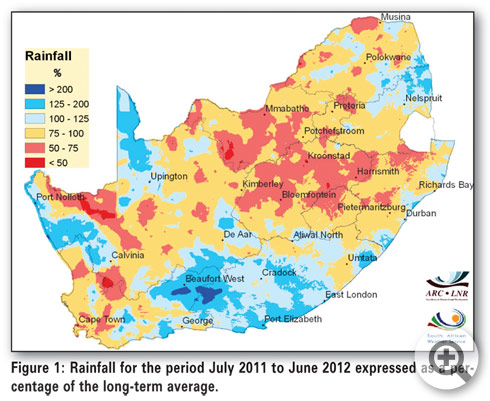 Especially over the southern parts, producers were delighted to receive well above-normal rainfall after a prolonged drought experienced between 2008 and 2011. While large parts of the interior had experienced above-normal rainfall over the past number of years, the 2011/2012 summer rainfall season was surprisingly dry over many of the important grain producing areas, specifically over the eastern to central Free State into large parts of the North West Province.

Cumulative twelve month rainfall from July 2011 to June 2012 was less than 500 mm over most of the Free State and North West Province (Figure 2). Based on rainfall decile information for the season, it is estimated that over large parts of the Free State, the rainfall total during the important October to March-period did not exceed the rainfall experienced in the driest 30% of years, or put differently, the total rainfall during the past rainfall season is exceeded at least during 70% of years (Figure 3). 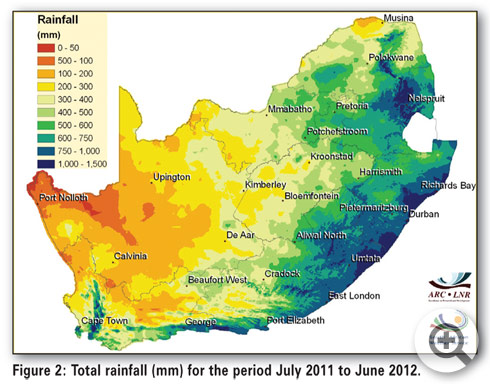 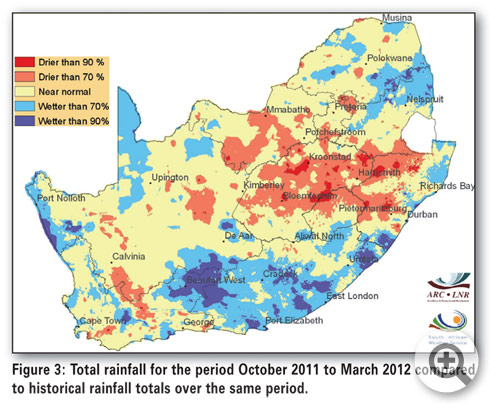 In fact, the eastern extremes of southern Africa and Madagascar were battered by tropical cyclones and depressions with another system, tropical storm “Irina”, affecting the eastern parts of KwaZulu-Natal in early March. The very active tropical cyclone season over the southwest Indian Ocean, with a lack of significant penetration into the subcontinent, can be seen as one of the reasons for drier conditions over parts of the interior. The upper air circulation anomalies (Figure 4) demonstrate unfavourable conditions for widespread above-normal rainfall over the interior. 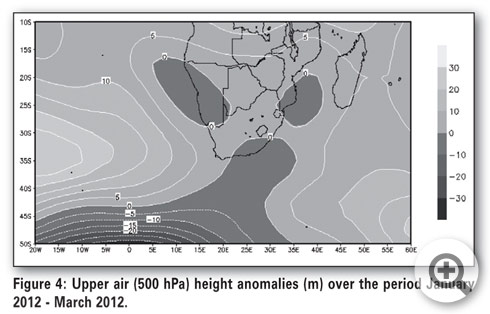 The departure from average heights (darker – negative, lighter – positive) at the standard atmospheric pressure level of 500 hPa for the period January 2012 - March 2012 shows a weakening of the subtropical high pressure system directly to the east and southeast and towards the south of South Africa.

Towards the far southeast and towards the west of South Africa, the high pressure system was relatively well developed. The weakness in the high pressure system was partly responsible for weak westward steering of tropical systems well into the country as well as relatively less advection of moisture from the east into the subcontinent, while the upper air troughs represented by this anomaly to the south, were responsible for above-average rainfall over the southern to southeastern parts of the country. During wet, late summers, the persistence
of a subtropical high pressure system towards the south and east of southern Africa is associated with wet conditions over the country. As a La Niña event was present over the Pacific Ocean, seasonal forecast models mainly leaned towards above-normal rainfall over southern Africa during late summer.

However, the weakness in the ridge towards the south of the subcontinent has previously also been linked to below-normal rainfall over the summer rainfall areas during some La Niña events. Another feature that was not well represented during the past season, and that also tends to strengthen when pressure anomalies towards the south of South Africa are strongly positive (unlike during the past summer season), is the socalled Angola Low, an important area of moisture convergence towards the north of Namibia from where large amounts of moisture flow southwards towards South Africa during wet summers.

In spite of low rainfall totals and the isolated to scattered nature of rainfall events over most of the central interior, the regularity of thunderstorms had a positive effect on agricultural activity over many areas. This, together with the very wet previous two rainfall seasons as well as heavy rain during June 2012, contributed further to alleviating the effect of below-normal total rainfall over much of the important grain producing areas, especially those regions where shallow water tables are present.

During the previous summer rainfall season, the forecast of the Multi- Model System from the South African Weather Service gave an indication of drier than normal conditions for most of the country at the start of the 2011/2012 summer season (Figure 5), changing to an uncertain forecast in mid-summer and finally giving an indication of wetter than normal conditions for late-summer (one month lead forecasts). 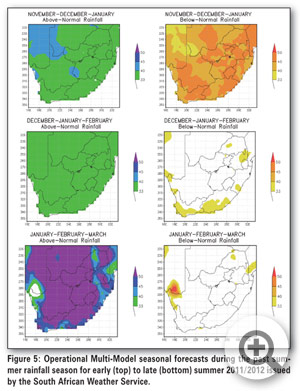 The slow start to the summer and the wetter than average conditions were correctly forecast for the southern and western parts for the country while the dry conditions during late summer over the central interior, were not foreseen. This could be attributed to anomalous atmospheric conditions described above over the southern African region that are not typical of La Niña summers while forecast models were influenced to predict wetter conditions over most of South Africa due to the 2011/2012 La Niña event, especially during the January -
March period.

The influence of factors other than sea surface temperature in causing variability on weekly to decadal scale, is a subject of ongoing research while so-called dynamic forecast models used to generate seasonal forecasts, are also constantly being improved in terms of features such as dynamical equation sets utilised, horizontal and vertical resolution, parameterisation schemes and numerical solution methodology.

Currently the Multi-Model forecast issued by the South African Weather Service only covers the period up to September-October- November (SON) and is giving an indication of increased chances of above-normal total rainfall for the central interior towards the eastern coastal areas (Figure 6). 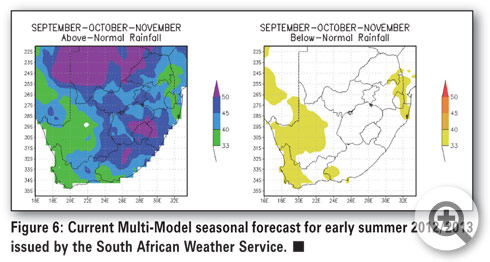 While the previous summer ended with dry conditions over most of the central parts, welcome rain during the current winter over especially parts of the Free State has had a positive effect on soil moisture and producers’ intentions to plant. Forecasts concerning El Niño Southern Oscillation (ENSO) are very uncertain during this time of the year and therefore it is difficult to make forecasts for the mid- to late summer of the next summer rainfall season at this stage.