An incredible cereal and proudly African

Sorghum, an ancient cereal grain that is a staple crop in India and throughout Africa, originated in Africa and can therefore be considered a proudly African cereal. During April this year, the first international sorghum conference of the 21st century was hosted in Cape Town.

The broad spectrum of topics covered during the five-day conference confirmed the important contribution of sorghum to food security worldwide. As part of the event, several symposia were presented with titles such as ‘Productivity and food security for the smallholder farmer’, ‘A driver for change: Sorghum’s role in global markets’ and ‘Bringing ancient grains to the world’s dinner tables’.

One of the plenary speakers at the conference, Prof John Taylor from the University of Pretoria, presented a discussion titled ‘Can sorghum meet the bread needs of the 21st century consumers?’

Wide range of uses and very nutritional
Sorghum has a wide range of uses, which include human food, animal feed, the production of alcoholic beverages and biofuels. Nutritionists categorise sorghum as a healthy cereal as part of a balanced diet, as it is rich in essential nutrients that are significant in the body.

Given its nutritional and increasing commercial value, many regions around the world are involved in the large-scale production of this crop. Sorghum is tasty and gluten free, but often gets over­looked in South Africa as it is still psychologically associated with poverty. Sorghum contains a wide variety of beneficial phytochemicals, such as tannin, that act as antioxidants in the body.

Sorghum is a good source for dietary fibre. It is safe to eat for those with Celiac disease. The Journal of Agricultural and Food Chemistry published a study that analysed the genome of sorghum to determine if it contained any gluten proteins. They confirmed that gluten is absent in all varieties of sorghum. Sorghum flour is becoming a popular gluten-free substitute for wheat flour in baked goods.

Sorghum – important for Africa
Nigeria ranks as the top sorghum producing country in Africa, and the second largest in the world. The estimated average production of sorghum in Nigeria in 2018 is 6,8 million metric tons, compared to the 8,7 million metric tons produced by the United States, ranked first in the world. Sorghum in Nigeria is mostly grown for food, while other minor uses include livestock food and industrial raw material for production of malt and beer.

In South Africa, we need to be aware of global trends and opportunities to increase demand and reduce supply bottlenecks of sorghum. According to the latest production forecast released by the Crop Estimates Committee in June this year, the expected sorghum production for 2018 is 83 070 tons. Sorghum’s nutritional and health-promoting attributes should be better understood and promoted.

Quality analyses
The focus of sorghum cultivar selection in South Africa has traditionally been on malting quality, but with the steady growth in sorghum for human food, the Sorghum Trust tasked the Southern African Grain Laboratory (SAGL) to develop a series of quality tests to annually evaluate different grain sorghum cultivars with the focus on food processing requirements for human and animal nutrition. 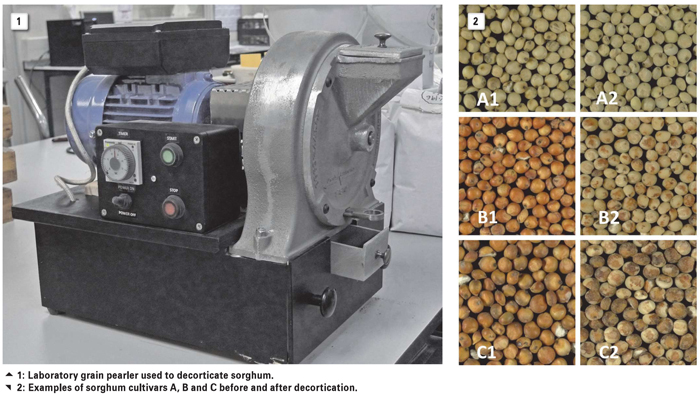 The cultivar samples for these annual evaluations are collected from cultivar trials conducted by Grain SA, the ARC and commercial breeding companies such as Pannar Seed, K2 Agri and Agricol.

Included in the range of quality analyses parameters is the evaluation of sorghum cultivars for decortication efficiency related to industrial performance. Because of the inherent size variation of whole seeds even within the same cultivar, sorghum kernel sizes are measured using image analyses which gives more detailed data than rigid sieve tests.

Based on the results of the quality analyses on cultivar samples, the need was identified to conduct similar analyses on commercially produced grain sorghum collected from silos or from farms with the aim to accumulate quality data on the commercial crop on a national level.

These surveys will be similar to the National Crop Quality surveys already in place for maize, wheat, sunflower and soybeans. Commercial samples are often mixed in terms of cultivars and the environment and climate conditions on the farms will influence the processing and nutritional quality of the sorghum grain.

Both commercial crop samples and imported grain sorghum will be tested for quality using the same range of analyses performed on the cultivar samples and in addition, a full grain sorghum grading and multi-mycotoxin testing will also be conducted. Mycotoxin analyses with the SAGL’s ISO 17025 accredited UPLC-MS/MS method will be included to address the limited available information on the occurrence and levels of mycotoxin on commercially produced grain sorghum in South Africa. The presence of 13 different mycotoxins namely Aflatoxin B1, B2, G1, and G2, Ochratoxin A, Fumonisin B1, B2 and B3, T2- toxin, H-T2 toxin, Zearalenone, Deoxynivalenol and 5-acetyl deoxynivalenol will be reported.

Since the same analyses will be performed on imported grain sorghum and the locally produced crop, the industry will be able to compare locally produced quality with that of imported grain sorghum. The South African Grain Information Service (SAGIS) information indicates that South Africa imported more than 55 000 tons of sorghum during 2017/2018, mainly from the United States of America.