Alternaria leaf blight is caused by Alternaria alternata, which is the predominant Alternaria spp. Of sunflower responsible for significant yield losses in South Africa. A recent five year survey carried out by ARC-Grain Crops has shown the disease to occur in all major sunflower production areas viz. Limpopo, Mpumalanga, North West Province and the Free State.

Alternaria leaf blight is currently one of the major potential disease threats to sunflower production in South Africa. Fortunately, there is a collaborative research programme between the University of Pretoria and ARC-Grain Crops to improve the understanding of the causal organism, the epidemiology of the Alternaria leaf blight and to attempt to develop an integrated control system based on fungicide sprays.

Recent studies by the University of Pretoria have indicated that Alternaria alternata is seed-borne (Photo 1) and is able to infect seedlings from a very young age. These infections take place during head formation. Recent studies carried out by ARC-Grain Crops and the University of Munster, Germany, have shown these infected harvested seed to be contaminated by two secondary metabolites (mycotoxins) namely tenuazonic acid and tentoxin, that were most frequently found in the shelled and unshelled sunflower seed samples. Tenuazonic acid has been found to have acute toxic effects on various mammals. 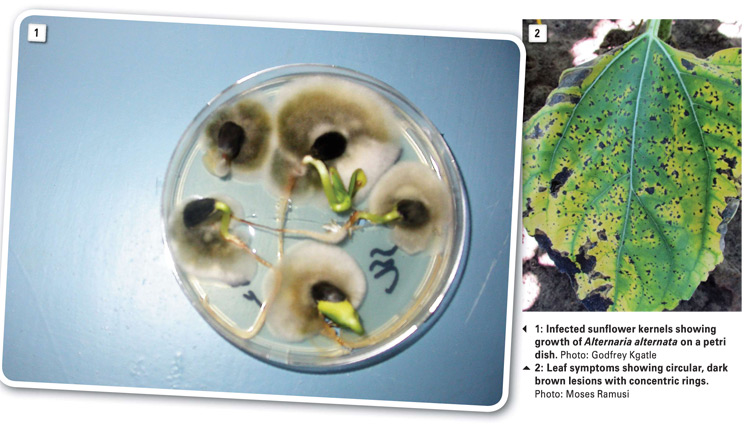 Epidemiology of the disease
Alternaria spp. overwinter on diseased stalks in the field and has been reported to be seed-borne. The sunflower seeds commonly distribute the primary inoculum. The pathogen may contaminate the seed surface or the seeds may be infected systemically from the mother plant.

The husk of the seeds is infected before the infection spreads to the embryo of the seed. During germination, the pathogen is transmitted to the cotyledon or the seed coat. The seed is infected and during germination, the pathogen is carried either passively on the cotyledons, or on the seed coat. During systemic infections, the fungus grows into the ovule and later develops from the seed into the seedling.

The epidemic of the Alternaria pathogen commonly starts when the plants start flowering. The epidemic reaches the maximum intensity when plant senescence occur. The factors that contribute to epidemics of Alternaria leaf blight include an increase in inoculum, environmental conditions that favour an elevated level of spore deposition, and predisposition to wounds.

Alternaria leaf blight is usually favoured by temperatures of 25°C to 30°C and twelve hours of leaf wetness.

The disease is initiated when spores land on leaves or stems, germinate in the presence of moisture and directly penetrate and infect the leaves.

When the environmental conditions are favourable, the Alternaria condiums are able to germinate within three hours.

The conidia are able to produce multiple germ tubes; these tubes penetrate the leaf cells directly through the cell walls or stomata.

The probability for stomatal penetration is low and often happens by chance, the fungi often grow over the stomata without penetration. The Alternaria disease cycle is simple due to their lack of a sexual stage.

The pathogen has the ability to overwinter or endure as spores or mycelium on decaying plant debris as dormant infections in seeds.

Several environmental conditions including heavy dews, frequent rains and high temperatures promote the production of conidia. As with any plant disease, the epidemic depends on several factors such as the inoculum, environmental conditions that promote an elevated level of spore deposition or any wounds present on the plants that can enhance susceptibility to pathogen infection. Susceptibility of the plant increases with the maturation of the plant as Alternaria infection causes premature leaf senescence. With favourable conditions the leaf blight progressively spreads to the upper leaves. The Alternaria disease proliferates even more when the host plant is subjected to any kind of stress, except when the stress influences the survival of the pathogen.

Lesions will eventually enlarge in size and unite causing blighting of leaves (Photo 2). Some lesions can be identified by distinct yellow halos, particularly on young plants. Stem lesions start as dark flecks that enlarge to form large elliptical to diamondshaped sunken lesions. Dark brown oval to circular spots with a target board appearance can form on heads. If the disease is severe, plants may be defoliated prematurely and die or frequently lodge.

Disease control
The disease can be controlled through cultural practices such as crop rotation, destruction of plant debris and tillage operations that bury and rapidly promote residue decomposition. The disease can also be controlled by the use of resistant or tolerant varieties and correct plant spacing.

Chemical seed treatment with fungicides significantly reduces the incidence of Alternaria seedling blight. Unfortunately, no fungicides in South Africa have been registered to be used to control Alternaria leaf blight.