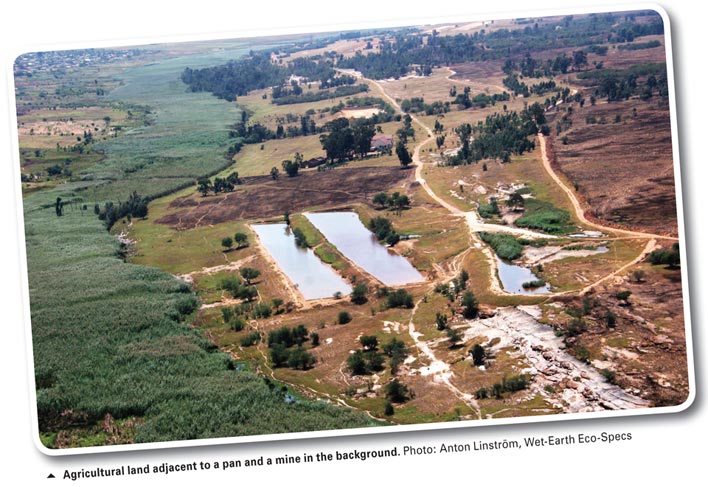 Worldwide, food and water security has become a growing concern and population dynamics a reality. 2014 is the UN International Year of Family Farming – therefore the Ramsar Convention chose Wetlands & Agriculture as the World Wetlands Day theme for 2014, focussing on the past, present and future importance of wetlands as a critical agricultural natural resource. The important role that wetlands play in food and water security can thus not be ignored.

In South Africa, many communities rely on wetland environments for their livelihood: Providing fibre, protein, water and an agricultural resource (cultivation and grazing). This reliance on wetlands is expected to increase rather than decrease in both rural areas and those adjacent to impoverished urban communities.

It has been reported that the agricultural sector has been responsible for the destruction of wetland systems by draining, cultivation and overgrazing, often without applying any wise principles of use.

Another significant player within this scenario is the mining industry with its increasing impact on both high potential agricultural land and wetlands. The Department of Water Affairs and Forestry (DWAF, 2005) reported that in some catchments over 50% of the wetlands have been destroyed as the result of drainage of wetlands for crops and pastures, poorly managed burning and grazing and subsequent donga erosion, planting of alien trees in wetlands, mining and urban development.

The National Biodiversity Assessment 2011 Report (Driver et al., 2012) stated that 65% of wetland ecosystem types in South Africa are threatened, including 48% that are critically endangered, making wetlands the most threatened of all of South Africa’s ecosystems.

Agriculture and mining are regularly accused as culprits responsible for wetland degradation and loss. Against the background of the above and other reports, it seems evident that South Africa needs to not only determine and substantiate the nature and extent of agricultural impacts on wetlands and on how wetlands sustain related agriculture, but also to quantify these effects from a geographical and resource point of view.

Such evidence-based quantification and qualification should enable the much needed determination of expected agriculture and wetlands interactions in future and interventions to ensure balanced and sustainable practices.

Furthermore, the expected long-term impact of mining on agriculture needs to be defined. Wetlands are often hailed as one of the measures to rectify poor water quality discharge from mines. Herein might arise an opportunity to further both agricultural resources and wetland conservation.

Much needed interaction and awareness on key issues

Wetlands and the functions of wetlands go beyond agriculture and mining to include a range of other ecological functions and socio-economic benefits. A balance is therefore needed between the supporting, regulating and cultural services of wetlands on the one hand and its provisional services which include the provision of food, water, fibre, medicine and fuel on the other hand. Establishing and maintaining this balance was the driving force behind the Agriculture, Mining and Wetlands Interaction Workshop that was recently held.

The Water Research Commission in partnership with the ARC-Institute for Soil, Climate and Water and the South African Wetland Society hosted the Agriculture, Mining and Wetlands Interaction Workshop during the National Wetlands Indaba, 2014. The main aim of the workshop was to recommend short-, medium- and long-term research needs (Grundling, 2014).

Dr Wietsche Roets, from the Department of Water and Sanitation, addressed the participants on wetland policy, legislation and management and said that the Department of Water and Sanitation’s primary mandate is to manage, use, develop, protect, control and conserve South Africa’s water resources. Any activity that can potentially impact on these valuable and sensitive water resources must be properly regulated through the specified processes in the National Water Act.

Mr John Dini (South African National Biodiversity Institute, Ecological Infrastructure) highlighted the fact that wetland destruction is inevitable, as trade-offs continue to be made for the sake of development. Offsets provide a mechanism for compensating for the unavoidable residual loss of wetlands and the services they provide, once all options for avoiding and minimising impacts have been exhausted. The Department of Water and Sanitation is in the process of compiling a position paper on wetlands, a guideline on activities affecting wetlands, amending the wetland delineation guidelines and adopting the wetland buffer and wetland offset guidelines.

The latter provides methods and metrics for designing offsets that compensate adequately for impacts on wetlands as ecological infrastructure, biodiversity assets and providers of ecosystem services. Dini said that the intention is to adopt the offset guideline within the Department of Water and Sanitation to ensure that wetland offsets are applied in a consistent, predictable and acceptable manner.

This river supplies a major portion of the water for domestic purposes in the Cape Metro, 22 500 ha of irrigation for high value crops on 600 farm units along the Berg River system and a gross farm gate value of R911 million of which R642 million was from exports (2005 figures).

The agricultural activities provided 14 100 permanent and 16 500 temporary jobs during 2005. Presently this natural resource is in a degraded state and poses a major threat to human health (water and flooding) and a decline in the economy (loss of jobs and land because of flooding).

Dr Johan van der Waals (Terra Soil Science) took a closer look at the impact of mining on agriculture and wetlands. There are two different forms of mining, namely opencast coal mining and sand mining. Both have significant impacts on both agriculture and wetlands. Van der Waals’ presentation gave a good perspective on the above conflicts by clarifying hydropedology processes dominant in plinthic catena found in mining environments.

The plinthic horizon is often an indication of a fluctuating water table, critical to both agriculture and wetlands. For example, a plinthic horizon can act as a “reservoir” of water for crops during short and intense dry spells during the growing season. However, during high rainfall years the crops may drown. If the water table is close to the surface, it complies with the definition of a wetland according to South Africa’s National Water Act (Act 36 of 1998).

Internationally, especially within the European Union, there is a paradigm shift from the destructive use of wetlands towards sustainable “wetland agriculture”. Paludiculture, for example, is a novel land-use practice recognised by leading international academic institutions and environmental agencies that might be more resilient under climate change (too much or too little rain).

In Europe, the biology, ecology and cropping requirements of Typha as well as the harvesting technologies and technology chains for the production of the construction materials (boards, panels, etc.) have been tested in large-scale, real-world experiments.

Furthermore, Typha is also suitable for waste water treatment, nutrient control and can be efficiently used as an easily affordable renewable biofuel. Participants received the “wetland agriculture” idea for application in the South African context with both enthusiasm and caution. Dr Sliva discussed the opportunities, changes, environmental and social impacts and implementation risks of this innovative Typha-based small-scale industry. 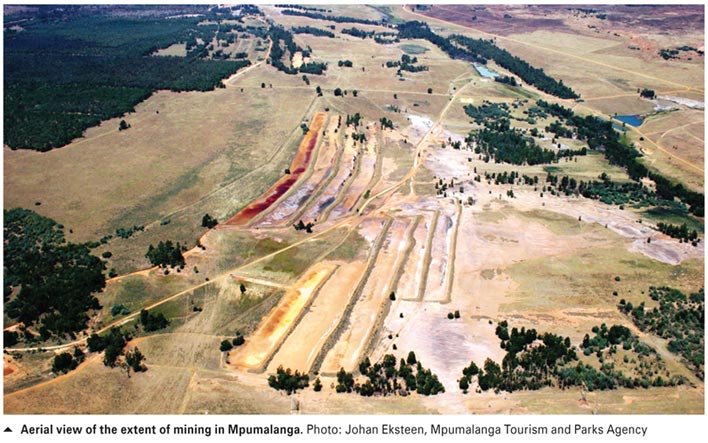 During the workshops, participants listed critical questions for future research, such as:

Agriculture and mining with associated activities poses a real and significant risk to water resources, such as wetlands, as it changes the landscape and creates numerous new hydrological and water quality gradients.

It will be in the long-term interest of both these industries and the society in general, to adopt the wise use of wetland practices, to protect and improve this valuable natural resource and enhance the integrity of the landscape in which it is situated.

For reaction from the agricultural community on the main discussion points and critical questions or for general wetland enquiries, please contact Dr Althea Grundling at althea@arc.agric.za.

Acknowledgement is hereby given to the Water Research Commission, South African Wetland Society and the ARC-Institute for Soil, Climate and Water.