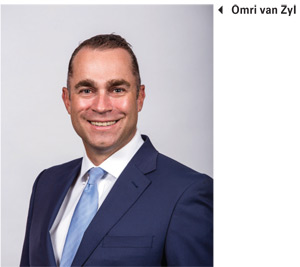 CEO Global, a business and professional services company, has focussed on identifying and awarding Africa’s leading talent over the past 16 years. Van Zyl was named as the continental winner under the category of agriculture in their ‘Leading African Recognition Programme.’

CEO Global’s chief executive, just under 5 000 nominations were received from various economic sectors from across the continent for the 2016 awards. It is indeed an achievement in its own right just to be recognised as a continental finalist.

Nominees undergo a multi-tiered judging process. The judging panel consists of four tiers and comprises 24 representatives from across Africa with leading figures from the business and public sectors. Quality assurance is provided by KPMG throughout the judging process and the highest possible standard is maintained.

Continental winners will also be afforded the opportunity to join the ‘Network of Influence’, which will give them access to developmental tools and serves as a platform to bring together small and medium enterprises with corporates and the public sector.

Agri SA is a member of the World Health Organisation (WHO) and hosted the First General Assembly of the newly established WFO in South Africa during September 2011. WFO is an organisation of agricultural producers that aims to strengthen producers’ positions within value chains, with a particular focus on smallholder farmers. By advocating on behalf of producers and representing their interest in international policy forums, WFO supports producers in better managing extreme price volatility, leveraging market opportunities and timely access to market information.