Very good news for producers was announced this month when the Minister of Trade and Industry signed off on a higher reference price level for wheat. The International Trade Administrative Commission (ITAC) of South Africa recommended a new reference price level for wheat at $294/ton, which is an increase of $79 from the previous level of $215/ton.

The ITAC approved the increase of the reference price level for wheat to $294/ton to encourage a more competitive wheat industry.

Along with the request to increase the reference price level of wheat, a request to withdraw the rebates on wheat to Botswana, Lesotho, Namibia and Swaziland was also considered. These rebates allow for the duty free importation of wheat, for those countries that are not producers of wheat (except for Namibia). The Commission could not agree with this request.

The ITAC reported that there was also a request by some parties to decrease the reference price of wheat, but the effect of reduced protection for wheat producers led to the rejection of the request.

Motivation for the increased wheat tariff

In Graph 1 the decreasing trend of the area planted in South Africa is illustrated. In the same period however, wheat yields were increasing, with yields improving from around 1,2 ton/ha to the current 3,7 ton/ha levels. This is a massive 208% growth in yields over a period of 20 years.

The question that most of the industry then started to ask is why if the wheat industry’s production potential is increasing at that high a rate, did the actual production remain in constant terms as seen below? The easy answer is that the area of wheat planted decreased at the same rate as the increase in yields. The planted area started off at 1,56 million hectares and is now standing on a mere 511 200 hectares; this is a decrease of 67% in planting area.

If the area planted remained unchanged for the past 20 years, the South African wheat industry would have been able to produce 5,83 million tons of wheat compared to the current 1,91 million tons.

With a decrease in production and an increase in consumption, a larger deficit grew within the wheat industry, which led to higher wheat imports as seen in Graph 4.

The ITAC also recognises this trend as it stated in their report “The trends in the wheat industry over a ten-year period between 1997 and 2007, have seen a decrease in production, a reduction in the total area planted, falling exports, rise in imports, falling employment and rise in prices. This has been accompanied by increased efficiency, productivity and quality. These trends beg the question: What is constraining increased production?”

The answer to this question or at least one of the answers is that the wheat industry is seen as uncompetitive with low international prices. This can be changed to a more competitive market with an increased import tariff in order to allow the local wheat farms to be able to compete with the international developed countries along with all their subsidies.

The calculation of the existing $215 tariff reference price for wheat

The $215 tariff reference price for wheat was put into effect on 17 May 2010. It was based on the five year average US No. 2 HRW Gulf fob price ($/ton) calculated at $236/ton plus an adjustment for distorting factors of 10,27% (as per the OECD producer subsidy equivalent for agriculture) less the average ocean transport costs of $45 per ton (average over the latest five year period) of importing wheat to a South African port to arrive at the average landed price of wheat.

This formula also accommodates exchange rate fluctuations. Adjustments to the level of protection will be based on quantum movements in the world wheat reference price as follows:

As seen in Table 1, if the current world reference price of $323 (also the current three week moving average HRW No. 2 price – see SAGIS website) is used with the tariff rate of only $215, then the tariff rate is $108 below the world reference price. If this is the case, the duty on wheat falls into negative values and wheat can be imported duty free.

Why did the tariff need to change?

With the international wheat prices increasing to higher levels over the past five years, the $215 tariff was no longer able to protect the local market from uncompetitive international markets. With the world reference prices ranging between $250 - $400 as seen in Graph 5, a tariff reference of $215 will then never be implemented as a tariff, as will be explained in the next section.

As stated earlier, the wheat tariff is calculated on the difference between the three week moving average of the US HRW No. 2 and the reference price. If the $294 reference price is taken into effect, the calculation will then be as illustrated in Table 2.

The duty is still negative and no tariff will be added to wheat imports, but with the higher reference price, the world reference price does not need to trade near $215 levels, but on $294 levels before producers will be protected by the import tariff rates on wheat.

Hypothetically, if the US No. 2 HRW wheat prices traded around the $280 levels as seen in Table 3, then a tariff will be implemented. 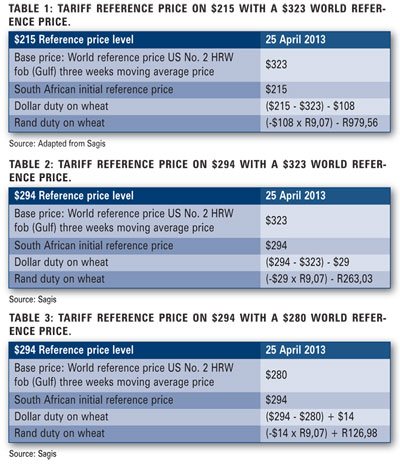 This might be interpreted that the tariff on local markets will ensure that the local Safex prices will not trade below R3 400 per ton levels (subject to exchange rate). However, R3 400 will only apply if HRW No. 2 is imported and compared to the current Safex price – see Table 4 for calculation. 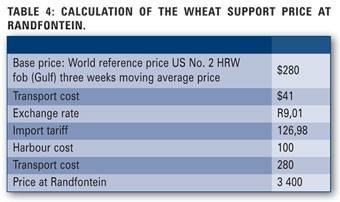 This, however, is not the whole story and the price level of R3 400 per ton is still subject to the demand and supply on the local market, which in turn is affected among others by a variety of imported wheat prices.

What effect will the tariff have on the import of wheat other than US HRW No. 2? 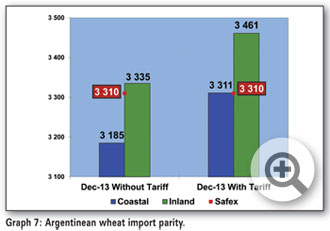 How will this impact the local market?

It should still be clear that Safex is a free trading market and even with the tariff, prices on the South African market are based on the local supply and demand numbers. Local prices do however follow the international price levels and import parity prices, but local prices will only increase if the fundamentals also play their part.

Based on SAGIS and the Crop Estimates Committee, the current supply and demand balance sheet is seen in Table 5 and it is expected that local demand (total consumption, including both human and animal) will increase, but will this lead to higher domestic usage and a decline in stocks or will stocks remain constant and imports increase? 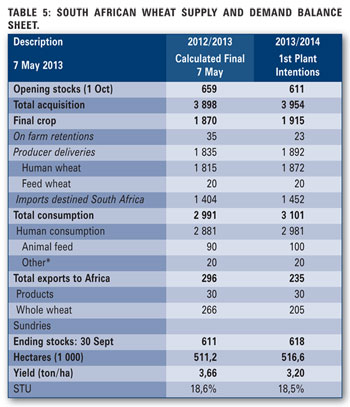 Either way, local prices will depend on the ultimate size of the local crop and whether wheat is mainly imported to supplement the coastal mills or all the way to Gauteng. Coupled with this is the quality of wheat imports – will mostly lower priced filler wheat be imported or will the local market also require substantial quantities of higher priced quality wheat imports?

A step forward, but more is needed

The adjusted tariff formula is good news for producers; they will now be able to compete with the lower international price levels. The Minister of Trade and Industry really looked after the wheat producers when this decision was made.

Will this solve all the problems in the wheat industry and increase production levels to the actual production potential?

No – as stated very well by the ITAC when they were approached by the agricultural sector to increase tariffs on specific products, in this case wheat. It is evident that the problems faced by the sector are multidimensional. These problems range from input costs, infrastructural issues and the management of land reform, to climate conditions.

The idea that increasing import tariffs are the only solution to all of these problems is at best misguided. These problems require a wellcoordinated policy response by the relevant government departments and agencies as well as collaboration with organised agriculture, with import tariffs only having one part to play. Such an approach would also increase prospects for creating more jobs in the industry.

This increased reference level will not solve everything, but it is at least one step in the right direction and a breath of fresh air for the wheat producers in South Africa.