A new era in wheat breeding

The Minister of Science and Technology, Naledi Pandor, at the end of October last year, officially launched a research platform at Stellenbosch University, to boost the development of more sustainable wheat varieties. The programme, referred to as the Wheat Breeding Platform, was initiated by the private and public sector in 2014, as part of a greater strategy aimed at reviving the wheat industry and in effect enhancing food security in the country.

Dr Marinda Visser (manager: Research and Policy Centre, Grain SA) explained that the wheat industry had been classified as an industry in distress in 2014, due to the high risks and small margins associated with production. The area under production declined from 1 400 000 ha to 482 150 ha between 1990 and 2016, resulting in production failing to keep up with demand, which increased from 2 000 000 tons to about 3 200 000 tons over the same period.

The shortfall in local demand has led to South Africa becoming more and more dependent on wheat imports, to the extent that imports currently accounts for roughly half the domestic consumption. Imports during the 2014/2015 season, because of the drought, reached a record high of 62% of local consumption.

‘The industry, during various workshops and consultations with various stakeholders, in 2014 identified the development of varieties with the ability to produce higher yields as one method to overcome the crisis,’ Dr Visser said. Mr Ben Durham, chief director: Bio-innovation at the Department of Science and Technology, said wheat cultivar development had been hugely distorted, as the primary focus over the past 20 years had been on the development of varieties with specific milling and baking qualities. ‘The Wheat Breeding Platform will address this distortion, by shifting the research focus to the development of more resilient and higher yielding varieties,’ he said.

Dr Visser said that this ‘focus on quality’ has resulted in South Africans producing wheat that is comparable with the best in the world. Processors generally, therefore, use South African supplies to enhance the quality of imported supplies.

The problem with the high quality cultivars is that gains in attributes associated with quality, is negatively correlated with yield. Yield per hectare in South Africa has therefore remained relatively low, fluctuating between 2,56 t/ha and 3,7 t/ha over the past ten years, depending on climatic conditions, according to the National Crop Estimates Committee.

Mr Willem Botes (research leader at Stellenbosch University’s Plant Breeding Laboratory) pointed out that there has been reports of a producer in New Zealand producing 16,79 tons/ha: ‘We are not aiming to go the same route, as people often overlook the fact that this wheat was aimed at the feed market. With the Wheat Breeding Platform, the aim is to develop varieties that have greater tolerance to stressors, such as heat and drought, during critical stages of development and to also, and in effect, enhance the yield potential of the cultivars. The endeavour, however, is not to produce these gains at the cost of quality, as the end product will still have to be suitable for baking.’ 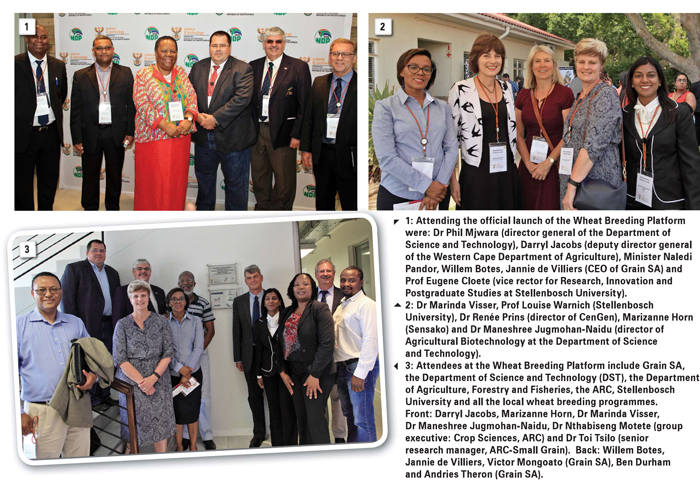 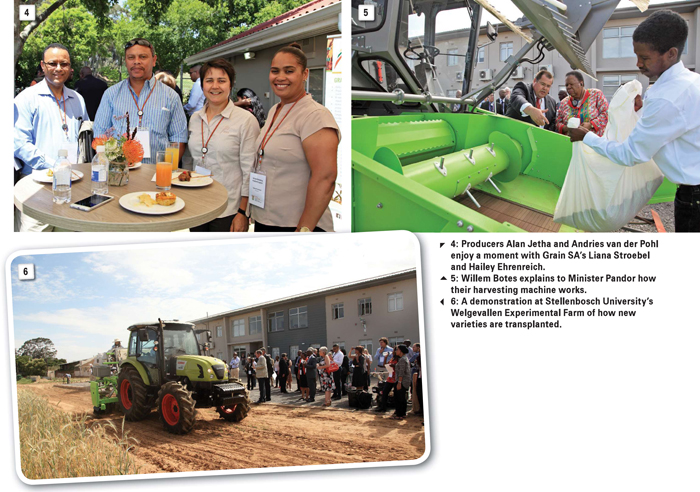 Minister Pandor identified the Wheat Breeding Platform as a valuable tool to help afford more smallholder farmers access to the industry. Ms Preline Swart, a wheat producer who has evolved from producing wheat on 2 ha to over a thousand of rented hectares near Elim in the Western Cape, echoed this, by saying the Wheat Breeding Platform could help to ‘alter the course of history, by allowing farmers to produce wheat more sustainably.’

The minister also sees the platform as a means to enhance food security, not only in South Africa, but the whole continent.

The use of new technologies and rising demand for food across Africa and Asia, could drive rural growth, benefiting nearly one in ten South Africans who depend on subsistence or smallholder farming, according to the minister. As such, she estimated that it could allow South Africa to triple exports and help alleviate poverty in the rest of the continent. She also referred to a 2015 McKinsey report that found growth in agriculture to be twice as effective at reducing poverty as growth in any other sector. Partners in the Wheat Breeding Platform include Grain SA, the Department of Science and Technology (DST), Stellenbosch University and all the local wheat breeding programmes.

Durham said the partnership signified a huge achievement that would take up to eight years to realise its full potential, as that was how long it took for a new cultivar to be developed and become commercially available.

The DST has invested over R15 million in the Wheat Breeding Platform and it has received further funding of about R20 million from the Winter Cereal Trust over the past three years.

The funding among others, ensures bursaries to postgraduate research students and made it possible for the Stellenbosch University’s Plant Breeding Laboratory to acquire modern hardware technology, such as Wintersteiger experimental harvester and planter as well as drones to monitor production.

A Perten 9500 near-infrared spectroscope also allows its technicians to quickly determine important quality parameters inherent to the germplasm being tested, such as protein percentage, kernel weight, moisture and flour properties.