The remaining five samples were downgraded as a result of a combination of one or more of the following deviations exceeding the maximum permissible deviation: Percentage foreign matter, other grain, sunflower seed, defective soybeans on the 4,75 mm round hole sieve, poisonous seeds and undesirable odour.

Based on the samples received for this crop survey, Sclerotinia did not pose any problems. Sclerotinia sclerotiorum, a fungus that produces hard masses of fungal tissue, is also known as Sclerotinia. The sclerotia consisting of a dark black exterior, a white interior and a rough surface texture, varies in size and form. Besides seed yield reductions, the disease also results in reduced seed quality and seed contaminated with the black sclerotia of the fungus. 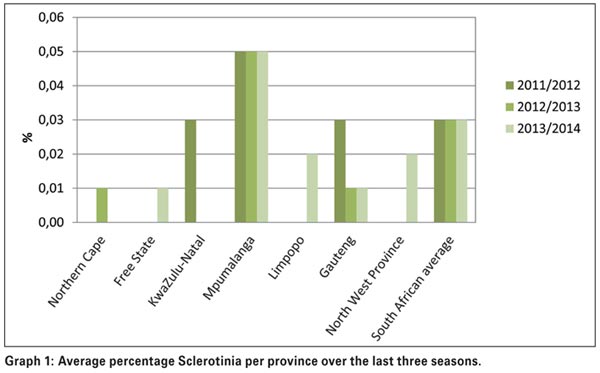 Gauteng province (seven samples) reported the highest weighted average percentage soybeans and parts of soybeans that can pass through the 4,75 mm round hole screen, namely 2,02% and Limpopo (three samples) the lowest at 0,42%. Mpumalanga, with the highest number of samples (67), reported an average of 1,50%. The Free State averaged 1,34% (51 samples). The national weighted average percentage over the last three seasons decreased from 2,97% in the 2011/2012 season to 1,36% this season. No samples were received from KwaZulu-Natal for the 2013/2014 season. 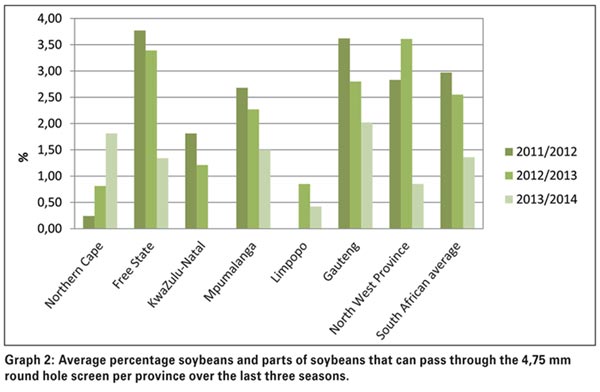 The grams per 1 litre of filling weight of the 150 soybeans samples were determined by means of the Kern 222 apparatus. The hectolitre mass was extrapolated by following the formulas obtained from the Test Weight Conversion Chart for Soybean of the Canadian Grain Commission.

The samples from the North West Province had the highest weighted average crude fat content of 20,7%. The lowest average fat contents were observed in the Free State and Mpumalanga, both with 19,5%. 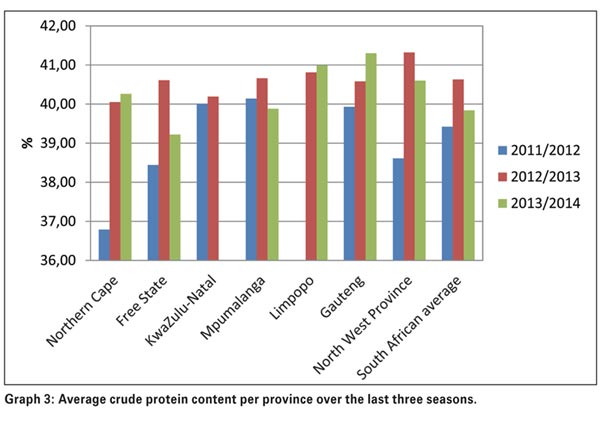 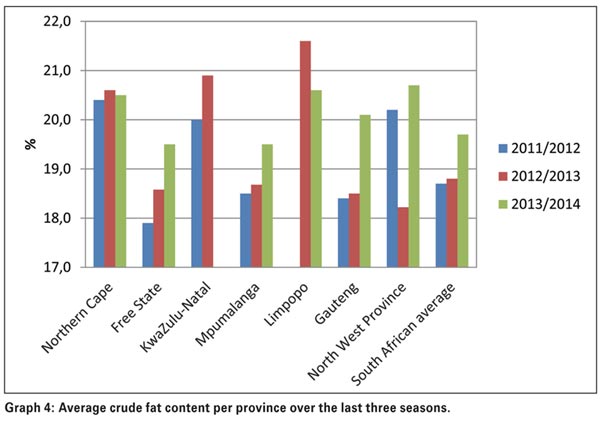 All 15 samples tested for genetic modification (GM) by means of the EnviroLogix QuickComb kit for bulk soybeans, tested positive for the presence of the CP4 EPSPS trait (Roundup Ready®).

Detailed results of this survey as well as that of the previous two seasons are available on the SAGL website (www.sagl.co.za). The annual crop quality reports in PDF format are also available to download from the website.

With gratitude to the Oil & Protein Seed Development Trust for financial support of these
annual surveys and to the members of Agbiz Grain for providing the crop samples.