The final commercial maize crop figure for the 2010/2011 season as calculated by the National Crop Estimates Committee, was 10 360 000 tons of which 58% was white maize. 693 composite samples were analysed by the South African Grain Laboratory (SAGL) to obtain a proportionate representation of the quality of locally produced maize.

The maize crop was of average good quality; with 69% of the samples graded as maize grade one. For more detailed information on the quality of the 2010/2011 crop samples, please see Table 1 for a summary of the quality data per class and grade. Tables 2 to 4 compare the quality data of white, yellow as well as white and yellow maize over the past five seasons. 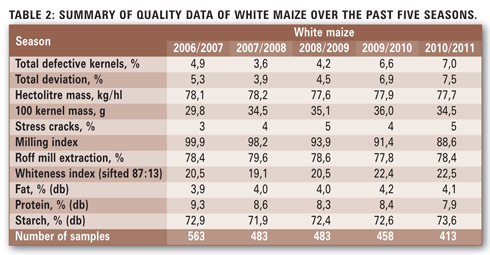 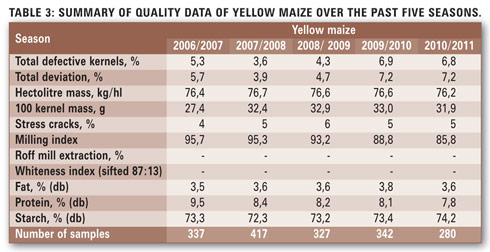 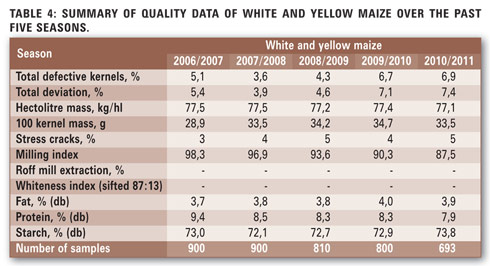 The average Fumonisin level was 139 μg/kg (ppb), the average Deoxynivalenol (DON) level 49 μg/kg and the average Zearalenone level 5 μg/kg. These values are well within the maximum levels specified by the European Union and the USA. No Aflatoxin, Ochratoxin A or T-2 Toxin was detected on any of the 77 samples analysed as part of this crop survey.

The EnviroLogix QuickComb kit for bulk grain was used to quantitatively determine the presence of Cry1Ab (MON810) and CP4 EPSPS (Roundup Ready) genetically modified maize in the above mentioned 77 samples. Cry1Ab protein in maize is produced from a gene derived from Bacillus thuringiensis (Bt). 97% of the samples tested positive for Cry1Ab with values larger than 0,4% (limit of quantification [LOQ]) and 88% of the samples tested positive for CP4 EPSPS with values larger than 0,05% (LOQ).

96 419 tons of white maize have been imported from Zambia during the same period. Quality data from Romania and the Ukraine are available on the SAGL website. The major downgrading factor of imported maize to YM2 and YM3 grades are the percentage defective kernels below the 6,35 mm sieve. The percentage stress cracks on imported maize was significantly higher than on local maize and as can be expected also the breakage susceptibility.

For more information with regards to the national as well as imported maize quality, please visit the SAGL website at www.sagl.co.za. Quality data is updated on a weekly basis as samples of the new crop is received from the grain storers and as samples of imported maize are received from the different harbours. Crop reports of previous seasons can be downloaded in a PDF format or alternatively contact SAGL at info@sagl.co.za. 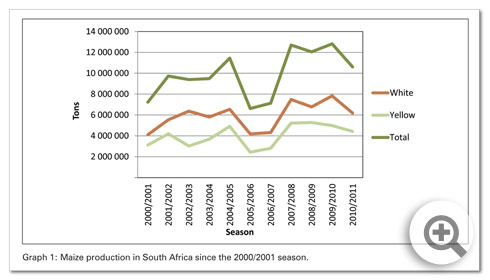 With gratitude to the Maize Trust for financial support in conducting this annual survey as well as to the Grain Silo Industry and the National Chamber of Milling and their members for providing the samples that make this survey possible.

With gratitude to the Maize Trust for financial support in conducting this annual survey as well as to the Grain Silo Industry and the National Chamber of Milling and their members for providing the samples that make this survey possible.