A look at subsoiler or ripper efficiency

Why is ripping necessary? When tractor and implements are used, soil compaction may take place because of the texture of the soil and plough-pan effect by heavy weight of large scale machinery. Soil compaction prevents the root development of plants and planted crops.

Soil compaction can be solved mechanically or biologically. With mechanical action, ripping is the most common practical method used to loosen the soil deeply through a rip action. This gives plant roots a chance to develop well, which produces healthy plants and good crops.

Drawbar power required
A rip operation, however, is an action that requires a lot of traction and energy. It therefore is very expensive, so it is important to do the operation as effectively as possible.

Wheel load
Wheel weight load also plays an important role in effective traction, but must be used in accordance with the tractor manufacturer's requirements. If the wheel weight load is too heavy, it may also result in traction disadvantages.

Graph 1 shows traction against 15% wheel slip with changed wheel load. The graph indicates that the pulling force is reduced when too much wheel-weight load is applied in soft soil.

Tyre pressure
Tyre pressure (Figure 2) also plays an important role in improving traction. Again, it is important to follow the tractor manual for the correct tyre pressure. Lower tyre pressure will allow greater traction and a bigger contact area to the soil, but can also lead to greater rolling resistance.

Tyre width
The use of wider or double wheels will enlarge the tyre contact area on the soil and therefore better traction (Figure 3). Wider tyres will also reduce soil compacting.

Wheel slip
A certain percentage of wheel slip is required for good traction. During wheel slip, the ground particles are compressed to create traction.

This can be a disadvantage for four-wheel drive tractors, because of the traction losses at the front wheels of the tractor. 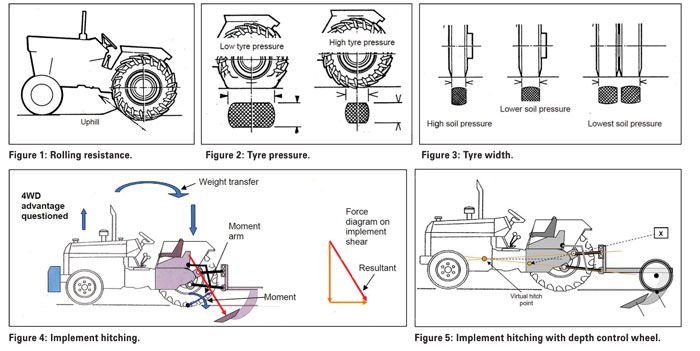 Different types of rippers
Rippers come in different shapes. The main differences are ripper teeth shapes, some straight teeth designs and some with an arc shape. Ripper teeth designs differ from each other because manufacturers try to create the best design for their product for best soil penetration.

Then there are also the different ripper teeth shears that are being used. The shears of course help to effectively loosen the soil. Manufacturers come with different ideas of shear designs to loosen the soil. In most cases, the ripper shears are mounted at an angle to achieve better penetration.

The other important component that is sometimes added is depth control wheels, especially on the larger ripper frames. The function of the depth control wheels is of course for more effective depth control, but also to balance the weight and traction between the tractor's front and rear wheels, which is ideal for four-wheel drive tractors or tractors with belt tyres.

Ripping efficiency
Rip processing is not a cheap operation, so it's important to do the operation as effectively as possible. The purpose of a ripping operation is to loosen the soil or break a plough-pan layer. Effective ripping can only be done when the maximum volume of soil is released. The energy input must therefore justify the output.

Several tests have already been done on different soil types and it has been found that not all rip actions are effectively done. The effectiveness of the ripping depends largely on the soil type, soil clay percentage and moisture percentage. The mechanical differences will, of course, depend on the working depth, working speed, shear type and shear cutting angle.

Photo 1 is an example of an inefficient rip operation where the soil is not properly loosened. Photo 2 shows an effective ripping process because the volume of soil is more effectively loosened. Thus, the amount of energy used to do the work is better utilised. 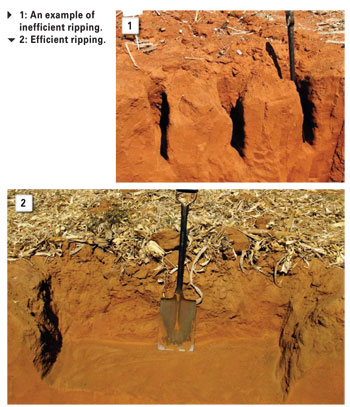 The pulling force required for rippers is generally very high, but will depend on the soil type, ripper teeth design and shear design. Of course, the ripping depth will also play a role. The question is, what is the optimal working depth because the deeper the ripping action, the higher the power demand.

Ripping depth will depend on the specific need, whether it is to break a plough-pan, or because of very sandy soil which need to be ripped every year because of the characteristics of the soil.

Shear design, shear working angle, shear width and placement of shears will also have an effect on the energy consumption. Tests have been done with different shear angles versus the drawbar power required.

Implement efficiency improved rapidly by increasing the ripper shear angle on the ripper tine. This is due to the fact that better and more efficient loosening of soil takes place. Again the amount of drawbar power is better utilised.

The spring tension setting will normally vary according to the soil type and conditions. It is important to check the ripper manufacturer’s manual and set it accordingly. When the setting is not correctly done it may either damage the ripper tine or have an impact on ripper depth control.

Conclusion
When a sub-soiler or ripper needs to be utilised, the following factors can be considered with regards to the operational efficiency: