A look at Exserohilum leaf blight of sorghum

Leaf diseases are problematic in crops for various reasons, one being that they damage that part of the plant tasked with the production of glucose (sugars). Every square millimetre of the plant’s leaf surface lost due to infection results in less glucose produced.

A second reason mostly unknown to producers, is the fact that when the leaves are damaged to such an extent that they cannot photosynthesise effectively, the plant utilises stored glucose from areas like the roots and stalks to fill the grain. This predisposes the plant’s roots and stalks to infection, resulting in an increase in root rot and lodging, which further reduces the yield potential.

Knowing which leaf diseases are a potential threat is accordingly vital in ensuring optimal yields. Maize and sorghum share a common pathogen in this regard. Exserohilum turcicum is the causal organism of northern corn leaf blight of maize, as well as Exserohilum leaf blight of sorghum (Photo 1).

Although the lesions produced on these two crops are very similar, an interesting fact is that not all isolates from this pathogen can infect sorghum and maize equally well. A specific isolate from a sorghum plant will thus not necessarily be able to infect a maize plant and vice versa.

In both these crops the yield impact associated with the disease is, however, severe in susceptible cultivars if the disease is established before flowering. Although much has been reported on northern corn leaf blight in this regard, information regarding the impact of leaf blight on sorghum is somewhat lacking. During the 2014/2015 season, a trial was conducted at the ARC-Grain Crops Institute (ARC-GCI) to establish the resistance levels of selected cultivars as well as to establish sorghum yield loss associated with E. turcicum infection (Photo 2).

Although the trial had many technical aspects, the basic components of the study were the following: Four sorghum cultivars were included, i.e. PAN 8816, PAN 8906, PAN 8625 and NS 5511. The disease severity levels required to establish the yield loss impact associated with the disease, were created through eleven fungicide treatments which consisted of two fungicides (azoxystrobin/difenoconazole and epoxiconazole/pyraclostrobin) being applied on five different dates (six weeks, six to eight weeks, eight weeks, eight to ten weeks and ten weeks after planting).

A control was included, which did not receive any fungicide application. The trial was inoculated with E. turcicum at approximately six-leaf stage and the resultant disease development recorded at critical growth stages.

High levels of disease severity were achieved (Photo 3) with the final disease severity measured at the hard dough stage, varying between 4,4% and 69,33% over the various cultivars and treatments. Evaluation on the control plots results only, indicated that PAN 8906 as well as PAN 8625 were the most susceptible cultivars measuring leaf blight disease severity of 65,33% and 59,78% respectively (Graph 1). 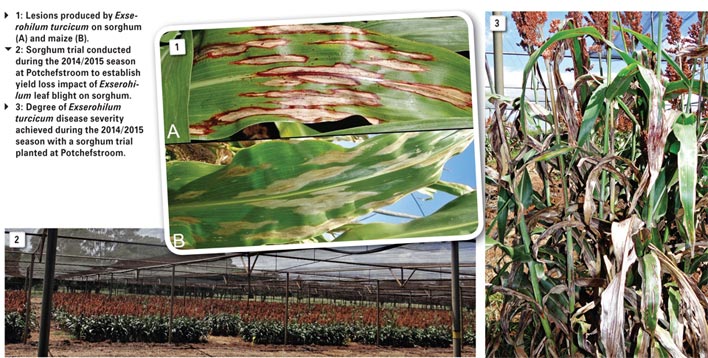 PAN 8816 had 52% diseased leaf area, whilst NS 5511 demonstrated a high level of disease resistance, with only 8,9% disease leaf area measured at hard dough stage. Both fungicides tested, gave similar control to each other at the various application dates, with the best control being obtained when they were applied twice during the season (eight and ten weeks after planting).

None of the applications significantly reduced the leaf blight severity with the resistant NS 5511 when compared to its control treatment, indicating that even under such severe inoculum pressure, it was not economically viable to spray this specific cultivar in order to control the disease. Regression analyses were conducted on the different cultivars and fungicides used in order to establish the yield loss impact. The best fit with regard to regression analysis was obtained with PAN 8625 (azoxystrobin/difenoconazole treatments).

Yield loss of 7,6% was observed at flowering for each 10% increase in disease severity (Graph 2). For the same cultivar, a yield loss of 5% for every 10% increase was observed at soft dough stage (R2 = 80,2%, SE = 0,231). Although more research is required to confirm the findings of the current study, these figures are quite similar to that which have been reported internationally for northern corn leaf blight on maize, i.e. a 2% to 8% yield decline for every 10% increase in disease severity.

The second aspect is knowing the resistance level of the cultivar. Resistance cultivars are available in the market and producers should contact their seed suppliers in this regard. The utilisation of resistant cultivars is a viable method to reduce inoculum levels, as well as impute costs associated with fungicide application.