A focus on vegetable oils

The South African economy is poised for a slowdown in 2012, with real GDP growth forecast to come in at 2,7%, down from an estimated 3,1% in 2011. Although private consumption should hold up relatively well, serious headwinds from the global economy will inevitably take their toll on growth.

Given the poor outlook for growth in the US, China and euro-zone, South Africa is likely to suffer from the weak global growth. The question now remains how the abovementioned statement will influence the shortterm outlook for local and global vegetable oils in 2012.

In 2011, the most important price making factors were the palm oil production cycle, the biggest annual jump in crude palm oil (CPO) production and the shortfall in soybean production in South America due to the ongoing drought conditions.

On the supply side

Rapeseed
EU rapeseed production for 2012 has been trimmed down to 19,5 million tons amid reports of winter kill in Europe. There are also problems in the Ukraine due to ongoing drought conditions. With winter kill affecting canola and even wheat, it is possible that producers in the Ukraine will plant summer varieties of sunseed in their place. There is a possibility of big sunflower seed crops in 2012 in this region as a result of higher acreage. However, the probability of the same outstanding yields as in 2011 is small.

Plantings in the USA, starting in April, will now be carefully watched in order to restore stock levels. If planting weather in April is good, we can expect producers in the USA to plant more maize. A figure of 94 million acres for maize is projected and that would leave soybean acreage in bullish territory. However, soybean prices are relatively high compared to maize which could motivate producers to devote more hectares to soybeans.

Sunflower seed
The big surprise of 2011 was the outstanding production of sunflower seed in the Ukraine and Russia. It was a profitable season for producers and crushers alike. Therefore it is expected that the same or larger acreage will be devoted to sunflower seed in this region this year.

Indian vegetable oil production last year exceeded that of many previous years and thus Indian imports were almost half a million tons lower (Table 1). Unfortunately the Indian government did nothing to encourage and expand the cultivation of oilseeds and thus will be most likely to see rising imports this year.

The Indian market came to the rescue of the sunflower seed producers of the Ukraine and Russia in 2011. Amidst a surplus of sunflower oil in the world, Indian consumption has expanded and has made good use of very attractive prices (Table 2).

There is some doubt over estimates of the rapeseed crop being harvested at present in India. A recent survey put the crop at 6,2 million tons, but that figure is being questioned. Production is more likely to reach between 5,3 million and 5,8 million tons. Current high prices of rapeseed in India also point towards that level of crop.

The Indian government is in the process of undertaking a massive food security programme. It will guarantee minimum amounts of cereals and food items to each citizen at a subsidised price. When implemented, it will create a large burden of food subsidies and will also increase total Indian consumption of food grains. India will continue to be the largest market for palm oil in the next year (Table 2).

The political leadership in China is in transition with new leaders taking office in April. Market participants foresee that further reductions in the cash reserve rate (CRR), cuts in interest rates, and measures to stimulate growth, will unfold after the new team takes office. The State Reserve needs to rotate and to replenish its stocks and are waiting for the right moment to do so.

The impact of petroleum on the palm oil complex

Petroleum behaves like any other commodity market, with high prices having the following effects:

Since 2007, vegetable oil and petroleum prices have remained connected in a price band with EU oil prices at a premium to Brent crude (Graph 1). 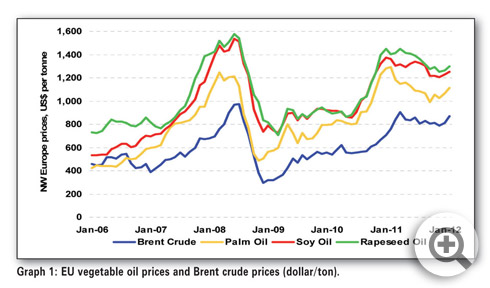 Reviewing the trends in the EU palm and soy oil premium versus Brent, we see that last month, both were below their average levels since 2007. In other words, the recent rise in vegetable oil prices has lagged behind the rise in petroleum prices. This is bullish for crude palm oil prices, in that the premium over Brent crude may be expected to rise, rather than fall.

Except for Europe, the rest of the world will enjoy strong growth with emerging countries leading the way. Geo-political tensions such as the situation in Syria and Iran, will keep crude oil prices strong for most of the year.

During 2011 we saw indifferent weather in many parts of the world. The last was the La Niña in South America. There is an ongoing drought in southern USA, but other than that, it may be safe to assume reasonable weather for 2012. Some of the usual occurrences we must watch out for are a bad monsoon in India, a drought in the Ukraine and southern Russia or even drought in parts of Europe. Finally there is some sign of the emergence of a new El Niño, but it is really far too early to conclude anything.

If we have reasonable rains and no El Niño in Malaysia and Indonesia, we must expect a big recovery in crude palm oil production from November 2012 onwards. If we have good planting weather in North America, we must expect a big increase in canola plantings in Canada. These would be balanced by lower soybean plantings in the USA where producers would plant maize extensively. Maize is planted first and planting and preparation conditions are ideal.

The biggest threat comes from Europe and a possible collapse of the euro leading to a fall in commodity prices. Prices could also be affected by a threat of war as a result of geopolitical tensions around Iran or big weather problems in any part of the world.

The global demand and supply for vegetable oils seem to be in balance over the entire length of the year. However, the situation is pretty grey in the first half, until June 2012. This period will also coincide with peak summer demand in India, when the country relies on imported edible oil for almost 80% of its consumption.

The new sunflower seed crop from the Ukraine and Russia will only be harvested from August onwards. Soya oil availability for export from Brazil and Argentina is going to be tight given the expanding production of biodiesel and lower yields of soybeans. Stock levels will be tight and vegetable oil prices could peak around June.

From June, prices will be in the hands of a weather market in North America. Much will depend on how crude palm oil production turns out to be in the months from July to October.

Given all these bullish inputs and given steady world economic growth coupled with low interest rates, market analysts expect crude palm oil prices to climb steadily from now and peak at 1 250 dollar/ton (F.O.B.) by the end of June 2012. After June, crude palm oil prices are expected to decline and remain in a band of 1150 dollar.

Soybean oil prices have already climbed past 1 200 dollar (F.O.B.), but could peak at between 1 250 dollar and 1 300 dollar (F.O.B.). Soybean oil has been losing market share to sunflower oil and this will not change until we know the fate of the next sunflower seed crop in Europe. Rapeseed oil could trade at a premium to soybean oil. Even if canola production expands by 10% in 2012, this increase will be absorbed very comfortably.

2012 has the possibility to be a year of two halves. The first halve, or at least until June 2012, could be extremely bullish with tight stocks. In the second halve, the focus will shift on how the production of vegetable oils perform in the Northern Hemisphere countries.